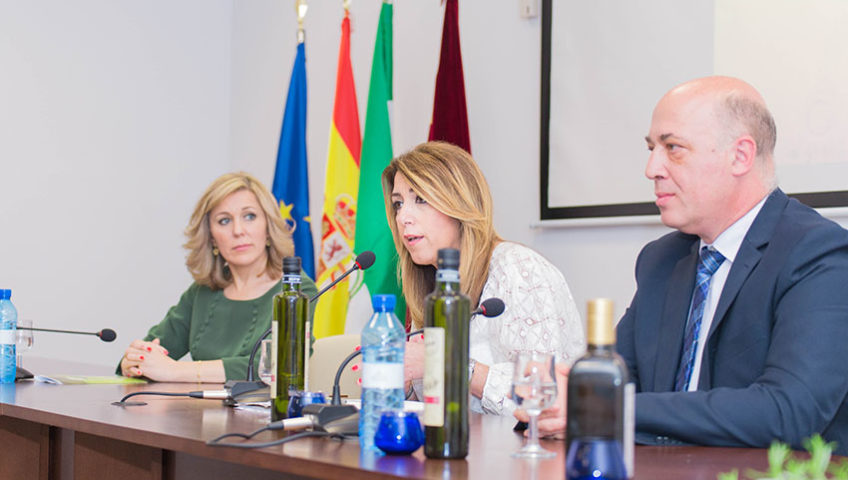 From today until 19 May, the Olive Oil Complex of the Fundación Patrimonio Comunal Olivarero de Montoro (Córdoba) will host the 19th edition of the Montoro Olive Tree Fair, which will bring together more than a hundred exhibitors from the national and international scene. A new edition of this exhibition full of optimism that breathes a high degree of satisfaction among all attendees after the rains that have taken place over the last few months.

The inauguration ceremony was attended, among other authorities, by the President of the Regional Government of Andalusia, Susana Díaz; Antonio Ruiz, President of the Provincial Council of Córdoba and Ana María Romero, Mayor of Montoro and President of the Olive Fair Consortium.

The President of the Regional Government of Andalusia, Susana Díaz, has called on the central government to be “firm and forceful” in the defence of the Common Agricultural Policy (CAP) in the face of the cuts proposed by the European Commission (EC) in view of the Community framework 2021-2027.

In addition, Mr Díaz pointed out that the agricultural sector has complied with the “great effort” he has asked it to make in the CAP and that, now, we must respond to this effort: “I believe in the Europe of the people, which does not hide behind big figures or other interests, but puts people first. Thanks to the CAP, the small and medium-sized producers, who are the ones I am most concerned about, have been able to fix the population to the territory, to take their families forward and to set up companies and cooperatives that have invested a lot in R&D&I in recent years. Right now we are facing a horizon of cuts in these funds and I believe that both the Spanish Government and the EC need to rethink this situation. Susana Díaz also guaranteed that she would be aware of this situation and pointed out that the CAP has an impact of 1.7 billion in Andalusia, 290 million of them in the province of Cordoba, which means that “if Europe takes this decision, it is wrong and puts itself in front of people’s interests once again”. He pointed out that he is addressing this issue with the entities UPA, ASAJA, COAG and the cooperatives, which are also in “permanent dialogue” with the Minister of Agriculture and that they are conveying to the Government of Spain the need for “firmness to defend the interests of Andalusian producers”.

For his part, the President of the Provincial Council of Cordoba, Antonio Ruiz, said that “we should be proud and satisfied with the progress made in recent years. A satisfaction that certainly cannot serve us as a complacency but as a stimulus to face the present and future challenges of this sector of the olive grove, which is the only protagonist of the social, economic and cultural development of the province of Córdoba, so that it can face these challenges with guarantee”.

Ana María Romero, Mayoress of Montoro and President of the Organizing Consortium, has emphasized the international nature of the fair and the national and international repercussions of this event. “From today Montoro becomes the olive oil capital at national and international level. We are olive-growing peoples, all Andalusians are children of the olive tree and we are committed to the development of our land, of our peoples. The profitability of the crop and a price worthy of the oil are important”.

The XIX edition of this biennial event is part of the 8.000 m² of space at the disposal of the visitor, the exhibition of machinery, equipment and products related to olive groves and olive oil from ten autonomous communities, bilateral agreements with companies in the olive grove ancillary industry sector in the international context, presentations on current issues such as’In search of a decent income for olive groves: reconversion and self-regulation”, “internationalisation and research in the olive oil sector” or the “mechanisation of olive groves”, tasting and tasting sessions (2nd Extra Virgin Olive Oil Fair), competitions (International Extra Virgin Olive Oil Quality Competition “Pero León Mellado”, National Poetry Competition, Innovation and Technology Transfer Competition and Photography Competition) and several award ceremonies: AEMO prizes, 1st GEA-AEMO Prize for the Promotion of Olive Oil Consumption, Harmony Prizes, among other activities.