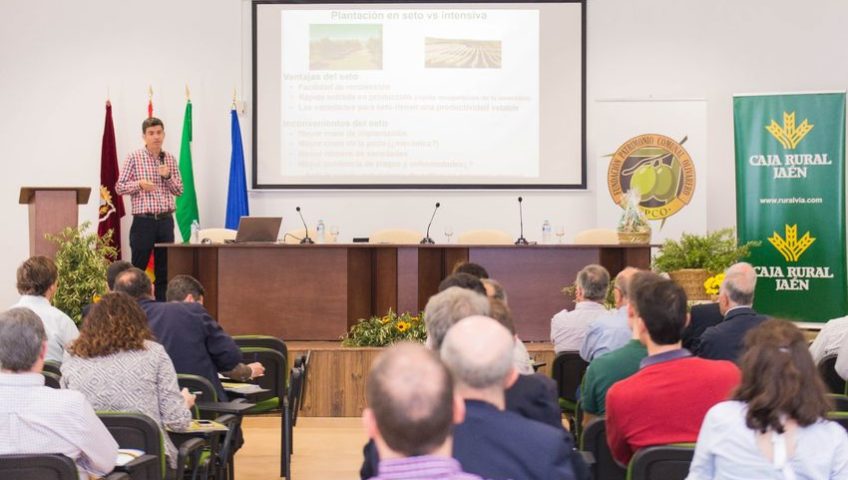 An important representation of researchers, farmers and producers from the olive grove sector met at the start of the Technical Conferences inaugurated today.

The first module of the Technical Conference of the Olive Tree Fair of Montoro has had a large number of attendees in each of the presentations that have been developed throughout the morning and part of the afternoon of today. The president of the Olive Fair Consortium and AEMO, Ana María Romero, was in charge of opening the event, stating that “we have to continue working for the small and medium farmers who are responsible for keeping alive the municipalities that have allowed us that in Andalusia, despite starting to have depopulation, has not been a factor as marked as in the case of other regions of Spain. In addition, he thanked the participants and experts for their assistance and encouraged them to look to profitability, “let’s fight for continued resources to be provided through the European Union, but not to cut back on the CAP”. Finally, he concluded: “We too, as farmers, packers and mills, have to do our job: to get the best price and, of course, to produce it at the best cost, so I hope that these days will serve as a learning experience and that we will carry a good message, new initiatives and concerns with regard to this sector”. Luis Rallo Romero, Professor of Plant Production at the Department of Agronomy of the University of Cordoba and winner of the XIV Plácido Fernández Viagas Andalusia Research Prize for his research and teaching activity on olive groves, moderated the event and gave the floor to José María Penco, Technical Director of AEMO.

The paper Penco dealt with “The costs of cultivation in Traditional Systems vs. High Density”, focusing on the profitability of olive cultivation: “A study has been shown that we carried out from AEMO in 2015 on the cost of production of one kilo of olive oil per kilo of olive. We differentiate the Spanish olive grove into five types of olive groves: intensive grove, superintensive grove, traditional mechanizable grove, traditional non-mechanizable grove and grove in irrigation and rainfed and then determine how much it is worth producing one kilogram of oil. What conclusion do we draw? We obtain that it is necessary that the oil has a decent price so that the income can be higher than the costs, since, in the last years, the price of the oil in Spain is low, which costs more to produce than the income that is generated” has clarified the Director of AEMO.

Javier Hidalgo (IFAPA) then gave a presentation on “Optimal management of water resources in olive groves”, in which he gave the general figures for olive grove irrigation area, which represents 36% of the total area of Andalusia. It has also travelled from the beginning of irrigation in the 1990s, as until then there was practically no irrigated olive grove. “As a result of a drought, irrigation began to take place and irrigation communities began to emerge. Between the 1990s and early 2000s, a total of six localised irrigation infrastructures were created. It should be added that irrigation concessions are scarce and do not cover crop needs. From the beginning, 750 m3, 1000 m3 and 1500 m3 were covered per hectare”. Hidalgo talked about how the needs of the olive tree are calculated according to the plantation framework, density, tree development and the year according to rainfall, where it can currently be between 3000 m3 and 5000 m3. “No one counts on those amounts, they are deficit risks. We (IFAPA) and the CSIF have developed a methodology for irrigation calculation and different irrigation tests for both oil mill and table varieties. Raúl de la Rosa (IFAPA) dedicated his presentation “New varieties for high density”, an exhibition adapted to the olive grove in hedge. The hedge olive grove is a new type of olive grove where the density of cultivation is much higher than that of other current varieties grown in Andalusia, such as picual hojiblanca. “There is little variety adapted to this system, such as Arbequina and arbosana. At IFAPA we have a breeding program for new varieties, so we are trying to get new varieties that are well adapted,” added De la Rosa. The presentation has been oriented towards the progress they are making with the programme and the behaviour of the varieties, since “due to factors such as the different environmental conditions, it is not the same to cultivate in Jaén, Cordoba or Huelva, the conditions are different and the behaviour of the varieties we have seen varies substantially”, he concluded.

Following this, the presentation “The intensive olive grove: management and production” by Victorino Vega (IFAPA) was based on the design of plantations based on what is now known as the new olive grove.