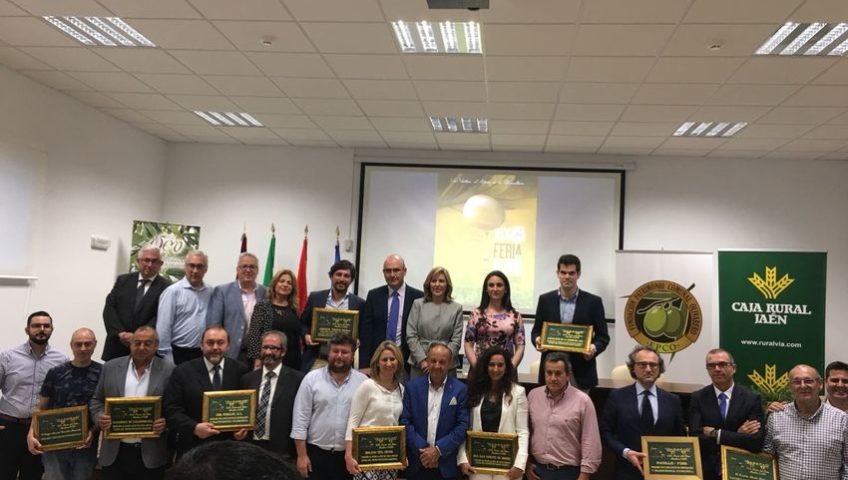 The Assembly Hall of the Fundación Patrimonio Comunal Olivarero hosted yesterday afternoon the Closing Ceremony of the XIX edition of the Olive Tree Fair, where prizes were awarded for the competitions organized by the Consortium for the Quality of AOVE, poetry, innovation and photography.

In this year’s edition, the 10th Extra Virgin Olive Oil Quality Award “Pero León Mellado” in the category of Ripe Fruity Olive Oil, has gone to the company Molino del Genil, S.L. de Écija (Seville), which it sells under the brand name Molino del Genil Premium Arbequina. The jury determined that “it is a medium-light fruity oil of ripe olives, with a fruity aroma reminiscent of fruit salad and notes of pear apple and banana. In the mouth it has a sweet and soft entrance, bitter and slightly itchy and ends with a pleasant aftertaste of almonds”. The second prize went to the company HENRI MOR, S.L. of Juncosa (Lleida), which sells under the brand name HENRI MOR Reserva Privada Arbequina. As for the third prize, the cooperative company Olivarera de Casariche S.C.A. de Casariche (Seville) has won the award by marketing under the brand name Oleoestepa. On the other hand, the Special Prize for the Best AOVE of the Montoro-Adamuz Denomination of Origin has been awarded to Aceites Prieto Reina S.L. under the brand name Pago de las Monjas. The jury of the competition has defined it as an “elegant oil with intense fruity green olives with a variety of vegetable and fruit notes including freshly cut grass, artichoke, tomato and green apple. In the mouth the oil enters brave but tamed at the same time, with a medium and balanced spiciness and bitterness and finally its aftertaste reminiscent of the alloza. Oil with a lot of personality and body”.

The prize at the 14th National Poetry Competition went to Manuel Laespada Vizcaíno for his work entitled “Tríptico de un resplandor”. As for the XVI Innovation and Technology Transfer Competition, there was a double ex aequo winner for the IMS Pesaje companies for the design of a system for determining the fat yield of whole olives in the olive mills’ yard; and for the joint project of Padillo and FOSS “Oleoptic”, a technological solution capable of determining in real time and using NIR technology the fat yield and moisture of the olive mass. A potential tool, since with the determination of these variables, the different machines and flows can be automatically and customised to optimise the process.

Finally, and as a novelty this year, Diego Manuel Garrido Miranda has received the award of the First Photography Contest with his work, where the author has captured with a masterful creativity the culture of the olive grove in the essence of Montoro. Photographers Juan Carlos Albuera Morales and Emilio Hueto León have received the first and second acessit.

The event was attended by Manuel Carmona Jiménez, Territorial Delegate for Economy, Innovation, Science and Employment of the Regional Government of Andalusia in Cordoba and provincial deputy Carmen María Gómez Navajas, provincial deputy for Tourism in Cordoba. The mayoress of Montoro and president of the Consortium Ana María Romero Obrero was the one who closed the ceremony, once again stating that it has been a great success for the sector, which is proving to be alive and promising for the future.