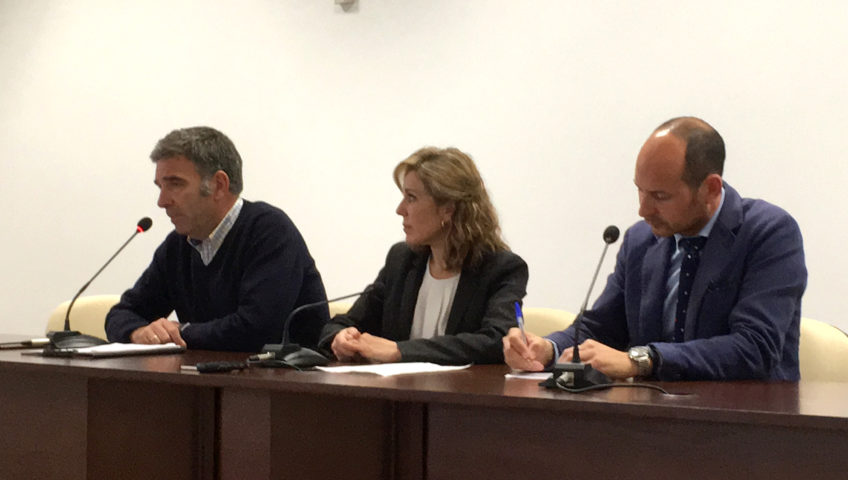 The gala presentation of the first edition of this award will take place in Montoro on 17 May, within the framework of the Olive Fair. This has been announced by GEA Iberia and the Spanish Association of Olive Tree Municipalities (AEMO), the promoters of this award, which will be presented in a solemn ceremony at the Municipal Theatre of Montoro from 20:30. The gala will be hosted by Ezequiel Martínez, presenter for many years of the programme “Tierra y Mar” on Canal Sur TV, and will bring together a wide range of professionals from the olive sector at national and international level.

These details were provided at a press conference held in Montoro to present the Prize to the media, at which the jury that will award this prestigious prize was also announced. The jury, which will meet at GEA Iberia’s headquarters in Madrid shortly, is made up of Álvaro González Coloma, manager of the Olivarero Community Heritage, and a representative of ICEX as a senior executive; Antonio López Farré, Professor of Medicine at the Complutense University of Madrid; Cristóbal Lovera Prieto, external expert with knowledge of the sector, olive grower, oil miller and former President of the DO Baena; a representative of the International Olive Oil Council; Juan Peñamil, director of the magazine Mercacei; a head of the Interprofesional del Aceite de Oliva de España which includes bottlers, producers and mills, the professor at the University of Jaén Manuel Parras, and the prestigious Italian oleologist and editor Luigi Caricato.

The president of the Spanish Association of Olive Tree Municipalities (AEMO), Ana María Romero, stresses that it is a unique prize with a relevant theme; it is an award that unites the incentive of consumption: “We really need to boost consumption and recognise those pioneers who began in those countries or sectors to encourage healthier fat that has been said by all medical researchers and that has also become fashionable in the gastronomic sector. Therefore, if you encourage consumption, you encourage the whole chain of the production process, innovation in mills and cooperatives, marketing, packaging and therefore also in restaurants and the media.

For his part, Rafael Cárdenas, head of GEA’s Centre of Excellence for Olive Oil, emphasises that the main objective of this award is to “encourage and thank all the companies and agents in the sector that encourage consumption; we believe that it is a way of sowing viability in the sector, of all the professionals who work in it, of all the people who work with olive trees. Therefore, the best way to do this is by recognizing with an award.

Furthermore, José María Penco, director of AEMO, points out that the international production of olive oil will grow considerably in the coming years. “The world will far exceed 3 million tonnes of olive oil produced per season and the only way to have a future in the sector is to create a balance between supply and demand. Supply is rising and we need demand to rise too, so that this balance generates a decent price for the farmer. So this is a prize for survival: we have no choice but to encourage the consumption of olive oil in the world if we want the world leader, Spain, to remain so for many years to come”.

This award is unique in the world for its theme and relevance, as it aims to become the highest annual recognition for the action, initiative or project that has managed to significantly increase the consumption of olive juice at the international level. The initiatives presented must be based on scientific, gastronomic, environmental, cultural or marketing foundations that have significantly increased the consumption of olive juice in the world. Associations, persons or institutions that by their nature, aims or contents are linked to the olive sector may submit their application to the following e-mail address: info@aemo.es.

Any natural or legal person, company, association, institution or working group whose action has been relevant in the marketing and consumption of Spanish olive oil in the last five years may be proposed for this award. Candidates must be Spanish and must carry out their work anywhere in the world or be individuals or entities based in Spain. The Prize will be awarded 3,000 euros and will take into account the promotion of olive oil consumption, that is, its increase, as its main criterion. In addition, coinciding with the awarding of the AEMO-GEA Prize, the organisation of the Prize will recognise a professional who has contributed to the development of the Spanish olive sector through his career.