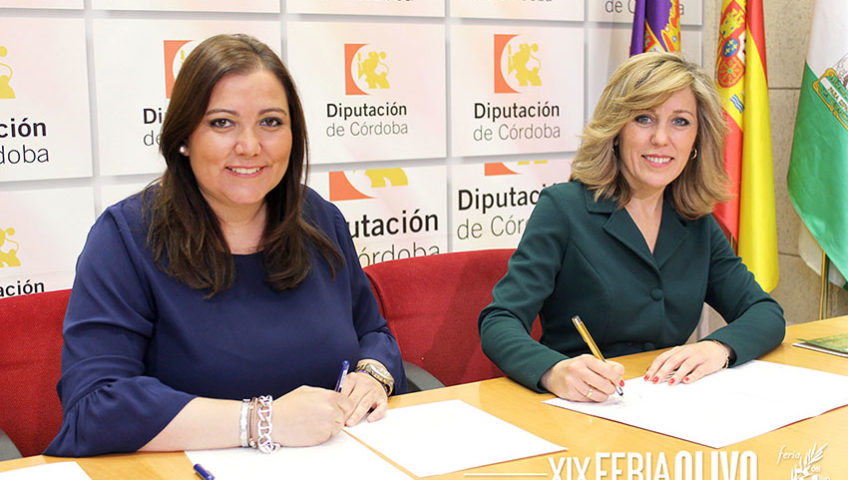 The Olive Fair is the last step in the preparations for its celebration, highlighting its international character in its XIX edition. Just two days before its inauguration, the Provincial Council of Cordoba hosted the official presentation of this biennial event at a press conference, in which it praised Montoro as a world meeting point for professionals in the olive oil and olive oil technology sector. The event, to be held from 16 to 19 May, is organized by the Consortium of the Olive Tree Fair and the City Council of Montoro, is promoted by the Spanish Association of Olive Tree Municipalities (AEMO) and the Club Recreativo Cultural Ilígora and has the institutional support of the Provincial Council of Cordoba, Andalusia, Fundación Patrimonio Comunal Olivarero, Grupo de Desarrollo Sierra Morena, D.O. Montoro-Adamuz and all those who in different ways mobilize economic initiatives of social interest, promote contacts and commercial exchanges. All this, with the aim of revaluing the olive grove as a cultural, historical and labour axis, as well as trying to promote and increase the consumption of olive oil.

In addition, another of the objectives of this fair is to focus on quality and to educate consumers to appreciate the quality of extra virgin olive oil, also encouraging the distribution and marketing of the oils and encouraging attractive marketing strategies.

This has been made clear by the delegate of Economic Development of the Provincial Council of Cordoba, Ana Carrillo, who explained that “this new edition of the Montoro Olive Fair is one of the most important in the sector in Andalusia. Córdoba is mainly an olive-growing province that has AOVE as its main food product, with four Denominations of Origin and this being one of the main engines of economic development, so we at the institutions must continue to take care of it”.

In addition, Carrillo explained that “we are aware of economic development, but we must continue to strive to increase a quality product such as olive oil. We work permanently to promote wealth, so that Montoro and its Fair become a reference point for the sector. This Fair is an important meeting point for professionals of the olive grove sector, a magnificent showcase for the dissemination of the latest technological and scientific innovations in the sector, thus providing the opportunity to establish solid business relationships, information exchange and analysis of current trends.

For his part, Francisco Zurera, regional delegate for Agriculture, Fisheries and Rural Development of the Regional Government of Andalusia, explained that “the Fair is more than just Cordoba. The olive sector has a great strength in the province with a notorious importance that becomes innovation, marketing and internationalization projects, which is why more and better quality olive oil is produced”. Zurera added that “we have 352,000 hectares of olive groves, of which 104,000 are located on soils with slopes of more than 20%. Cordoba shows a clear specialization in organic olive groves with 25,604 hectares, 41,000 olive groves, with between four and five million daily wages per year, with one hundred and eighty-four olive mills and four Denominations of Origin”.

On the other hand, Manuel Carmona, regional delegate for Economy, Innovation, Science and Employment of the Regional Government of Andalusia, defended that “the olive sector is a sector in which the auxiliary industry gathers these decisive and strategic attributes such as specialisation, technological innovation and internationalisation”.

In this sense, the Extenda Agency joins the common objective of the Olive Fair, encouraging operators from different countries to meet and bring importers, retailers, distributors or prescribers from different countries who meet Andalusian producers and companies to learn about their offer and business opportunities can be undertaken thanks to the 12th International Meeting of the ancillary olive grove industry to be held at the Fair on 16 and 17 May.

For her part, the Mayoress of Montoro and President of AEMO, Ana María Romero, stressed that “the Fair is today kicking off an international edition with more than a hundred stands from ten autonomous communities and seven countries (Germany, France, Italy, Algeria, Sweden, Morocco and Turkey), where trade missions abroad will be promoted through Extenda”. Romero has made a tour of the activities and events of the fair, including the Second Extra Virgin Olive Oil Show with the display and tasting of the Top 100 Evooleum 2018. The finalists of the 2018 Olive Fair Prizes, oils from the different Andalusian PDOs, will also be present.

From Thursday 17, the Technical Conferences will take place in the Assembly Hall of the Olivarero Communal Heritage. A series of lectures inviting the study, analysis and reflection until Saturday 19 May, which will give an important training agenda with relevant topics such as the search for a decent income for olive groves, the mechanization of traditional olive groves or the self-regulation of the sector, among others.

It will deal with issues such as the optimum management of water resources in olive groves, management and production of intensive and hedge olive varieties, new varieties for high density, key to obtaining premium olive oils. In addition, the Mecaolivar project will be covered, a research initiative supported by the University of Cordoba that focuses on the advancement of prototypes that improve the technification and economic profitability of the olive grove. Likewise, a colloquium will be held on the costs of crops in Traditional Systems in comparison with High Density and topics will be dealt with by experts such as internationalisation and research in the olive grove/olive oil sector; current issues of essential reflection and analysis in this Conference.

In addition, several national competitions will be held, such as the one on Oil Quality, Poetry, Innovation and Photography – the latter as a novelty of the 19th edition. In the same way, the’XII International Oil Competition’Harmony’ will take place. Likewise, the `I GEA-AEMO Award for the Promotion of Olive Oil Consumption in the World’ will be held. Also, the’Award Ceremony of the Spanish Association of Municipalities of the Olive Tree 2018′ will be held,

After the press conference, the president of the Provincial Institute of Economic Development (Iprodeco), Ana Carrillo, and the president of the Olive Tree Fair Consortium and mayor of Montoro, Ana María Romero, signed a collaboration agreement with an economic amount of 35,000 euros for the promotion and development of activities within the Olive Tree Fair. All this, with the aim of promoting the economic development of the province and the productive sectors that are its driving force.