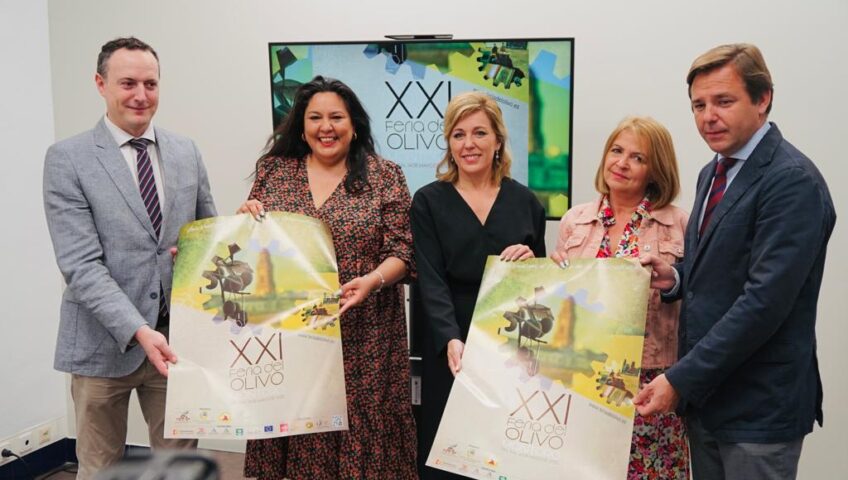 • This morning the official presentation of the XXI Montoro Olive Tree Fair took place at the headquarters of the Córdoba Provincial Council.

The event, which will be held from May 11 to 14, is organized by the Consortium of the Olive Tree Fair and the Montoro City Council. Promoted by the Spanish Association of Olive Tree Municipalities (AEMO) and the Ilígora Cultural Recreational Club, it has the support of Caja Rural Jaén, Córdoba Provincial Council, Junta de Andalucía, Fundación Patrimonio Comunal Olivarero, Sierra Morena Development Group, D.O. Montoro-Adamuz and all those who in different ways mobilize economic initiatives of social interest, promote contacts and commercial exchanges. All this, with the aim of revaluing the olive grove, as a cultural, historical and labor hub, and extolling Montoro as a world meeting point for professionals in the olive oil and elaiotechnics sector.

In addition, another of the objectives of this fair is to bet on quality and educate consumers so that they know how to appreciate the quality of Extra Virgin Olive Oil, also promoting the distribution and marketing of oils, encouraging attractive marketing strategies.

This has been made clear by the President of Iprodeco and 1st Vice President of the Córdoba Provincial Council, María Dolores Amo, who has explained the importance of the olive grove sector and Extra Virgin Olive Oil as an engine of economic development in Montoro. She has also influenced the programming offered for the most technological and innovative event in its history «we present a broad program, where the digitization of the olive grove sector has been valued. A place to demonstrate and be a benchmark in the forefront, in everything related to technology and science.

It is an edition that returns with great force. These are months of work where they have worked with enthusiasm to value not only the olive grove sector, but also the wealth that the municipality of Montoro has «we cannot forget that Montoro is the epicenter of the olive tree. Montoro, moreover, is a town that has managed to safeguard our most precious asset, the mountain olive grove and its extra virgin olive oil. For Montoreños, our Olive Tree Fair is an absolute pride, because from the closest proximity we offer all the best of us to value this product »Amo concluded. For his part, the Delegate of the Government of the Junta de Andalucía in Córdoba, Antonio Repullo, explained the importance of the role of Extenda and the foreign promotion of the auxiliary olive grove industry «specifically, Extenda is going to bring seven international operators from from countries such as the USA, Peru, Turkey and Algeria. It is important to value the work you do with these trade missions; We’ve had twenty performances so far this year. We have detected an important vein in the agricultural sector, in which 770 million euros have been exported in Andalusia with an increase of 18% over the previous year, highlighting the province of Córdoba with 87 million euros exported and with a growth of 3%».

Repullo has also mentioned the social and economic impact that the world of the olive tree has on our towns «We have to continue working on exports, on internalisation, since olive oil has become the leader in exports in Andalusia, with 2,600 million euros in 2021, which represents an increase of 17.4%. These data are very interesting, since 25% of that total amount comes from the province of Córdoba, with a growth of 30.6% ».

In this sense, the Andalusian Agency for Foreign Promotion – Extenda joins the common objective of the Olive Tree Fair, promoting operators from different countries to meet and bring importers, retailers, distributors or prescribers who meet Andalusian producers and companies, thus knowing their offer and business opportunities can be undertaken thanks to the XV International Meeting of the Auxiliary Olive Industry to be held at the Fair on May 11.

For her part, the mayor of Montoro and president of the Olive Fair Consortium, Ana María Romero, highlighted that it will be the fair for digitization and innovation.

Romero, has made a tour of the activities and events of the fair, among which the III Extra Virgin Olive Oil Show stands out with the sample and tasting of the Top 100 Evooleum 2022. The finalists of the prizes from the 2022 Olive Tree Fair and oils from the different Andalusian PDOs.

During Thursday, May 12 and 13, the Technical Conference will take place in the Assembly Hall of the Olivarero Communal Heritage. A series of talks in which study, analysis and innovation are invited, where an important training agenda will be given with relevant topics such as olive growing 4.0 and elaiotechnics 4.0, among which stand out